skip to main | skip to sidebar

Find me on the Web

Me vs. Jonathan Alter on corruption in the Obama administration

Trapasso is a longtime Democratic insider, with a pedigree rooted in the Terry McAuliffe corners of the Bill-and-Hillary Clinton world, but also with stints in the more lefty neighborhoods of the Party, including Howard Dean and Barack Obama. He’s worked on five Democratic presidential campaigns

The Free Press gives us this biographical snippet:

Trapasso comes from the law firm of Crowell & Moring, and had served as senior advisor to former Democratic National Committee chairman Howard Dean in the run-up to the 2008 election. Trapasso held several posts in the Clinton administration, including assistant counsel to the president.

Trapasso served as senior advisor to the chairman of the Democratic National Committee providing strategic counsel on donor fundraising programmes and on the 2008 presidential election. He also has held various senior-level positions within the federal government, including assistant counsel to the President for the Office of Presidential Personnel at the White House during the Clinton Administration.

Trapasso is a regular — though not heavy — Democratic donor. As a registered lobbyist, of course, he didn’t contribute to Barack Obama’s 2008 campaign. But his wife Susan, who is a homemaker, not a lobbyist, gave the maximum to Obama — her only political contribution on record.

I’ve written quite a bit about GM’s lobbyists, and given the partial government ownership of Chrysler, it’s worth repeating what’s going on here:

You pay your taxes. The Obama administration gives some of your money to Chrysler. Chrysler hires a Democratic fundraiser with that money.

Another big-government program, another glaring conflict of interest. My column looks at Cash-for-Caulkers:

The Obama administration appointee who would run a proposed subsidy program dubbed "Cash for Caulkers" has intimate ties to a company that has lobbied for the bill and would profit from it.

Al Gore acolyte Cathy Zoi, the Energy Department official in charge of energy efficiency, has testified in favor of the caulkers bill, which the House passed last week. She would administer it if it became law and is married to an executive at a window company that has pushed for this legislation. Zoi, formerly chief executive officer of the Gore-initiated Alliance for Climate Protection, also owns stock options in Serious Windows.

The massive lobbying army backing the caulkers bill, and the conflicts of interest bubbling up behind the scenes, is one more hole in President Obama's sinking claims of being a good-government reformer and a scourge of the special interests.

The Economist has a condescending, ungrounded piece today that has this interesting claim:

For example: the new health-care-reform law passed in March is an entirely private-insurer, free-market-based reform.

Michael Cannon at Cato has a very good takedown of this whole blogpost on how close-minded conservatives are, but I wanted to expand on the use of the phrase “free-market” in a description of a bill that, as Cannon writes, expands Medicaid, creates new insurance subsidies, the price controls, and places new mandates on individuals and employers.

We see Lefties roll this canard elsewhere when they want to paint as extreme the opposition to a big-government program.

Lee Fang, a liberal blogger at the Center for American Progress wrote recently:

The right has attacked Crist for voicing support for cap and trade, a free market idea to address global warming.

Q. What’s in common between (1) government mandates and subsidies for private insurance, and (2) government requirements that businesses use tradable carbon credits before burning their own fuel?

A. Some private business is making money.

So, for some lefties, that appears to be the definition of “free-market.” Of course, they are ignoring the “free” half of the phrase. Yes, cap-and-trade would create a market, and yes, newly mandatory, heavily subsidized, heavily regulated insurers will compete under ObamaCare — that’s a market, just not a free one.

Similarly, Lefties sometimes use “free-market” as a label on anything that both (a) involves profit, and (b) is bad. See Thomas Frank’s work for a gazillion examples.

To be fair, this confusion — that private profit is the same as free markets — is shared by many on the Right, who defend corporate welfare, thinking (or claiming) that it’s part of the free market.

Senate Majority Leader Harry Reid said Republicans are "making love to Wall Street." In my column today, I lay out the facts that make it clear that Harry Reid is carrying Wall Street's love child -- and it's named "Reform."

Reid's re-election coffers are filled with Wall Street lucre, and his fundraisers and former staffers are lobbyists for the biggest banks. And Reid's legislative history makes it clear that -- befitting the senator from Las Vegas -- the customer gets what the customer pays for.

Reid has raised more money from Wall Street than any Republican House or Senate candidate, according to the Center for Responsive Politics. In fact, among senators seeking re-election, Reid has raised more than the top three Republicans combined. As far as the parties go, it's not even close -- Wall Street has given 60 percent of its cash this year to Democrats, and seven of the top 10 recipients of Wall Street political action committee money are Democrats.

But the Reid-Wall Street relationship is more intimate than that. The real players in this affair are those professionals who walk K Street trading cash for special favors.

Goldman CEO: ‘We Will Be Among the Biggest Beneficiaries of Financial Reform’

In case you missed my columns explaining why Goldman will come out on the winning side of financial “reform” (here and here), or in case you actually believed the President’s rhetoric, Lloyd Blankfein, CEO of the nation’s largest investment bank, Goldman Sachs, put it very directly in a conference call today with private wealth-management clients on which the blog ClusterStock was listening in:

“We will be among the biggest beneficiaries of reform”

Of course, there’s plenty of context needed here. Blankfein wants more clients, and with regulation being inevitable, he has incentive to claim he won’t be hurt by it.

Also Blankfein can publicly say what many regulator robber barons say, something to the effect of well, regulation strengthens the whole system, and so everyone benefits, the best players moreso. This is almost always BS. Usually, the biggest businesses understand that they will get to tweak the details of the “reform” more than the smaller, less well-connected guys, and that regulation, by imposing new costs, crowds out the little guys.

Documentary goes after Abramoff -- and capitalism

My column today reviews the new documentary on Jack Abramoff:

But documentaries aren't just supposed to tell tales — they are supposed to make points. In the Abramoff case, there were plenty of points to make: Lobbyists have too much influence in Washington. Fundraising plays an outsize role in Congress. Power corrupts.

But the the-game-is-rigged theme wasn't enough for liberal filmmaker Alex Gibney. He drilled down deeper in search of more explosive stuff that would fit his worldview: The Republican majority by 2000 had become utterly servile to fundraising. Abramoff was a crook, and he pulled the strings in the GOP caucus.

But even those points were too broad to make the indictment that Gibney was seeking. Somehow, the story of Abramoff using his fundraising and political connections to make hundreds of millions of dollars off of Indian tribes needed to excoriate the whole notion of free markets.

The New York Times’ Jackie Calmes mulls over what she sees as a quandary — a “juggling act” by President Obama:

He has mixed, for example, condemnation of “Wall Street greed” with opposition to government caps on financiers’ bonuses, and criticism of oil companies’ profits with a recent call (now in abeyance) to expand offshore drilling.

This is a “juggling act,” no more than it’s a juggling act for a preacher to condemn gambling and drinking in public and then spend his nights boozing it up at the casino. It’s really called “saying one thing and doing another.” Or “being dishonest.”

So Calmes sees puzzles where a simple explanation exists, and a contradiction where none exists:

It is enough to give rise to the equally contradictory criticisms he endures, from longtime enemies on the right crying socialism and from disillusioned supporters on the left who lament what they see as Mr. Obama’s pro-business bias.

Is “socialism” contradictory to a “pro-business bias”? I don’t think so. I actually think Obama has blended the two perfectly, increasing government control of the economy in a way that benefits the biggest businesses — his support for the Wall Street bailout, a record-breaking spending bill (the stimulus) favored by the business lobby, a health-care bill that benefits the drug industry and makes private insurance mandatory… and I could go on.

Remember when President Obama thanked Majority Leader Harry Reid and the Senate for “standing up to the special interests?” If you don’t, go watch this video, just the first 25 seconds is enough to get the idea. And remember that Obama said that same sort of thing a dozen times.

Then watch this video.

You catch that part at the end, where the ad for Harry Reid, facing the toughest reelection of his life, was paid for by PhRMA — the drug lobby. And check these numbers from 2009, showing that PhRMA spent more than any single-industry lobby — or the numbers from 2010’s first quarter showing the same thing.

Of course, we already knew PhRMA liked the bill, and that it will be very profitable for the drug industry. But this Reid ad brings into focus the magnitude of the President’s mendacity:

This episode should be enough to make every discerning person ignore the President every time he claims to be taking on “special interests.

I've spent plenty of time calling out the Democrats as faux-populists who will help Wall Street's biggest banks. In my new column, I levy the same charge against the GOP:

Republican leaders have proven the Democrats right: The GOP's teeth gnashing about "permanent bailouts" was cynical populist showmanship -- and Republicans can't pull off that act as well as President Obama.
By proposing a financial reform bill that is mostly identical to the one proposed by Sen. Chris Dodd, D-Conn., Republicans have passed up an opportunity to simultaneously appeal to their base, by returning to their alleged principles of limited government, and appeal to much of the middle, by waging a populist battle against Wall Street's corporate-welfare queens who panhandle on Capitol Hill. 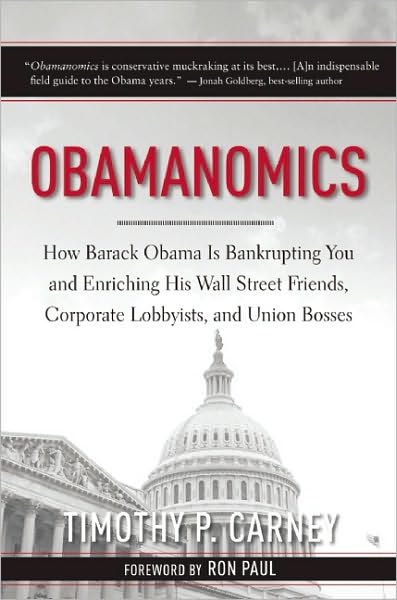 "Conservative muckraking at its best ... an indispensible field guide to the Obama years."

"Every libertarian and free-market conservative who still believes that large corporations are trusted allies needs to read this book, as does every well-meaning liberal who believes that expansions of the welfare-regulatory state are done to benefit the common people."

"This meticulously researched book is a must-read for anyone who wants to understand how Washington really works."

-David Freddoso, best-selling author of The Case Against Barack Obama

I am Senior Political Columnist at the Washington Examiner. My latest book os: Obamanomics: How Barack Obama Bankrupts You and Enriches His Wall Street Friends, Corporate Lobbyists, and Union Bosses. I am also the author of the 2006 book, The Big Ripoff: How Big Business and Big Government Steal Your Money (Wiley).

"Politicians like to say that government is on the side of the little guy. But with impressive documentation and persuasive examples, Tim Carney shows how government power and regulation are typically used to assist the powerful." --Paul Gigot, Wall Street Journal